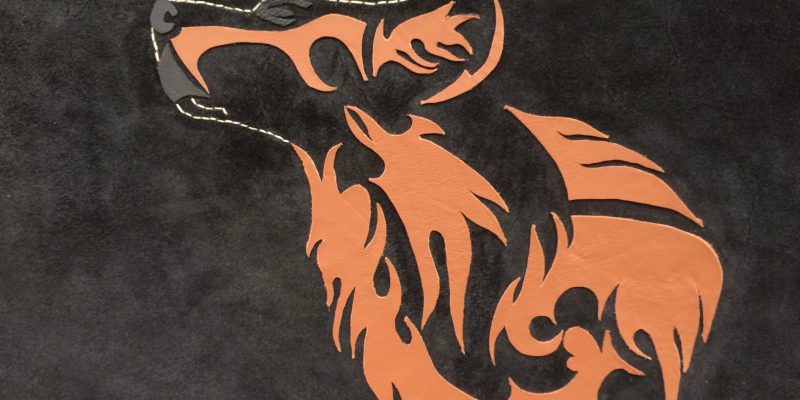 Very rarely, when one thinks of purchasing a work of art, do they immediately think of purchasing leather artwork. Most commonly one thinks of art as a sculpture or painting. Leatherwork has been, in a lot of our minds, limited to shoes and bags and the occasional jacket.

With the rise of the millennial and ‘afro-creatives’ across the world, many people are opening up to alternative art forms and Nkwazi caught up with 26year old Ray Chibanguza who specialises in 3D leather sculptures.

“Nowadays it’s much more important to speak about the raw materials you use to get the finished manifesto and I’m sincerely proud that its genuine leather all the way.”

Ray Rhay (as he is known in the art circles) explains that his relationship with genuine leather goes back to 2003 when he got his first pair of sky blue timberland boots.

“The aura of leather, its natural grain designs and durability quickly imprisoned me. I fell in love instantly and somehow, I knew one day, I was going to be able to reflect artistic thoughts on the processed skin,” he discloses, “My art is a leap of my generation, something different from what has been around.”

He describes himself as an underdog that has just emerged into this scene after having crafted his art for the last 24 months after coming to terms with his passion for visual art. Like most budding artists, Ray went through a number of phases before settling on leatherwork.

“I knew something amazing was coming. I realized the day I gave up on making music. Growing up I had always been a writer, but music didn’t matter anymore; whether Hip Hop, Rhythm and Blues, Rap, and Jazz. Honestly, I really love all genres but I just couldn’t finish writing a song. I would occasionally leave the song half way done, but with sketching once I got started I wouldn’t feel hungry or distracted. Nobody could get me off that table once I was in craft mode. That’s when I realized that I had found that cake I had been trailing to find,” Ray discloses.

After realizing that visual art was his craft, he would sketch on paper every time he got an opportunity, but stopped to give his undivided attention to school.

“I connected the elements together my true life experiences, visualized that the translation of these could only be done on genuine leather. So in the last quarter of 2015 decided to become a self-taught artist, and found out everything I could about the whole crafting process involved in this type of art; from the pristine material selection, cutting, sanding, installation and lastly polishing of the teak wood framing.”

Ray details that though his art has seen many changes over the years, he has never wavered from his purpose to produce visual art that challenges the status quo.

“The role I play is very simple, my designs are embedded with a deep understanding of my past, and my history drives my artworks. I strive to create a reflection of the past then translate it in the most futuristic way possible. Of course I have certain designer elements I consider to be my flagship DNA such as my black suede leather background but beyond that I have free rein to create anything completely new,” Ray says.

Though born in Zambia to a Zambian father and Zimbabwean mother, Ray spent most of his life in Zimbabwe where he did his lower and higher education. As a well-travelled citizen of the world, he holds a diploma in Sales and Marketing and an immeasurable wealth of knowledge from his globetrotting.

“I like travelling a lot. I consider it being the best way to learn about the world and its cultures. I can also say it’s my favourite life coach. I tried backpacking in South East Asia and I learnt a lot about the seas and colour,” Ray details.

He explains that his travels have translated and inspired some of his artwork such as the Bat.

“My inspiration behind this artwork, back to my early twenties when I travelled to the German city of Ulm Germany. I was with a couple of friends just fooling around in the abandoned wall pillar that oversees old & new Ulm city. As we were climbing up the stairs of the tower found myself wondering about what would happen in that narrow space if they were to zoom out of nowhere. Then I thought, bats are always known to be scary -let’s imagine them with some colour; would they still be little frightening mammals?

Though inspiration may hit him in the most profound of ways (and moments), Ray Rhay insists that he doesn’t have a favourite piece of art.

“I love all my artworks equally. There is none that I love less or more compared to the other,” he reveals. He describes creativity as assembling something that snatches leadership and becomes a benchmark forever.

Ray says the hardest and scariest moment in the creating process, is when he realises that he’s at risk of losing the aim of a piece of art.

“I get lost sometimes whilst crafting, it’s a critical point but automatically I find my purpose by becoming more innovative, more convectional, more extreme and uncompromised then eventually for some reason it always turns out perfect,” He reveals.

Art, in whatever shape, way or form speaks to everyone differently as individuals; to our minds our hearts and many have claimed, our souls. When asked about the most memorable response to his work, Ray expresses the importance of human connection.

“The most touching response I ever had was from an Amyotrophic Lateral Sclerosis (ALS) patient, failing of the neurological system disease. That has no cure yet. Her response to one of my pieces “Before the howl” was ‘it’s either we love one another or become paralyzed’. All family feuds must be resolved, howl for them before you can’t howl no more,” Ray concludes.

What do you dislike about the art world?

I dislike the fact that there are too many artists and not enough art lovers.

What’s the best piece of advice you’ve been given?

Life can be messy expect anything anyhow.

If you had a super power what would it be?

If only I could borrow the super power to incredible wisdom and execution.

What can’t you live without?

I honestly can’t live without the Sun.

What are your hobbies?

I’m a reader, a researcher, stand-up comedy and documentary lover.

If you were a song what song would you be?

If I were a song I would be Savanna by the Diviners feat Philly K.