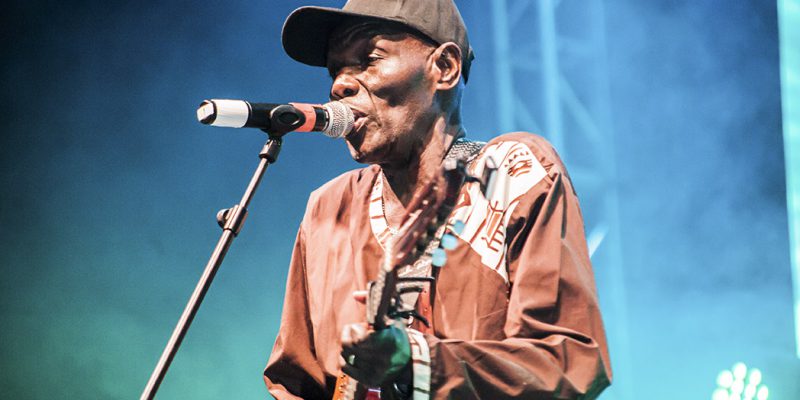 This, perhaps, is one of the most striking things about legendary Zimbabwean musician Oliver Mtukudzi. He is unapologetically African and proud of it, a trait that he hopes can be instilled in Africa’s young creatives. This pride is evident in his music, which is largely sung in his native Shona.

‘Tuku,’ as his adoring fans call him, let Nkwazi sit at his proverbial feet and glean some first hand nuggets of wisdom for young Africans and especially young African creatives. Whilst he expressed pleasure at the current state of the music culture on the continent, he emphasised that youths need not feel inferior, but rather learn to embrace their culture.

“We are good, we are doing well, but I feel we need to talk to our youngsters more about feeling inferior, about being proud of who they are, about our African culture and explain that it’s not inferior at all to any other culture.”

Tuku added, that people need not believe that the life TV depicts is reality but rather that they be sure to sieve through what they see in the media, especially as negative portrayals of Africa in the media adds to their inferiority complex.

He admitted that when it comes to his favourite musical era he’s biased in favour of older, classic African genres such as rhumba and kalindula. Though he does appreciate some newer genres. “That’s why when I collaborated with James Sakala I said I want kalindula music. This was because I feel Zambians are running away from who they are, and that’s beautiful stuff that you have here. But no youngster is doing that, and it goes back to the to the very first point again, we need to educate our youngsters, and instill in them that what we are is not inferior.” Tuku added that his current favourite song is ”Tura Mtoro,” which he sang with James Sakala.

Tuku’s main source of inspiration is the people he meets on a daily basis. “For as long as there are people, there’s always something to talk about. So everything comes from the people.”

Tuku’s creative process is also influenced by daily events from which he draws lessons. Being part of a certain conversation or seeing a bad driver can inspire lyrics. “So maybe two, three days later, I’ll recall that point and then start creating the lyrics, and after I’ve got the lyrics, then I get a sense of what tune to put on it. You don’t really budget time to do that, it is something that just comes and you think I must continue. That’s why it’s very difficult to tell how long it takes to write a song. I can tell time of recording, but as for creativity and coming up with a song, it’s difficult to tell how much time it takes.”

He added that when it comes to music if a song fails to move him emotionally then he won’t record it. “Every song is emotional, if it doesn’t have an effect on me then I won’t record it. I’ll just throw it away, because it needs to touch my heart before I expect it to touch the next heart,” he said. Tuku’s songs mean the world to him. They are among the most valuable things in his life and he credits his wife for giving him the space to make music and make him happy, because then his creativity goes up.

Tuku believes artists are a select group of visionaries who can impact others positively. They understand the world and talk about things before they happen. Tuku believes artists can bring positive change to political sectors. “If politicians work with artists, they would become more insightful than they are now, because artists are just a chosen few that are blessed with vision.”

Tuku concludes our conversation with a final word for young creatives. “They should have confidence, if they stay in Marapodi they should be proud of that place. They should lure visitors, because that’s where they are. That’s where and who they are. If you want to prove a point, take people to that place, and people will understand more about who you are.”